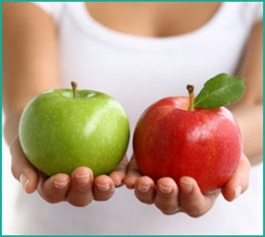 From very early in life, we’re conditioned to compare ourselves to other people. If we’re not careful, our entire lives can bounce from one comparison to another. Who ranks the highest in school? – Who has the happiest marriage? – Who makes the most money? – Who is the most successful? – And the list goes on!

Even in our childhood fairytale we recited, "Mirror, mirror on the wall, who’s the fairest of them all?" But it’s important to recognize that sizing ourselves up to other people can only lead to negative outcomes. We will either think more highly of ourselves than we ought (Romans 12:3); or become insecure, bitter, or jealous because we feel as if we don’t measure up. Galatians 6:4 teaches:

"Make a careful exploration of who you are and the work you have been given [...]. Don't compare yourself with others. Each of you must take responsibility for doing the creative best you can with your own life" (Message Bible).

The only measure we need is God’s planfor our lives.

Like many of us, the disciple Peter compared his life to someone else’s. When Jesus revealed how Peter would labor and eventually die for the Gospel, Peter wasn’t content with merely knowing his own destiny; he also wanted to know John’s:

John 21:20-22 states, “Peter turned and saw that [John] was walking behind them. […] When Peter saw him behind them, he asked Jesus, ‘Lord, what about him?’ Jesus answered, ‘If I want him to live until I come back, that is not your business. You follow me.’ (New Century Version)”

As Jesus noted, other people’s lives are not our business. God has placed each of us on a unique journey that will progress in its due season. Like Samuel, Timothy, and Jeremiah, some of us will find our destinies unfolding at early ages – but like Abraham, others may see their calling and desires unfold at a later stage in life. Either way, we must “go ahead and be what we were made to be, without enviously or pridefully comparing ourselves with each other” (Romans 12:6, Message Bible).

More in this category: « It Begins at Home Winning vs. Losing »
back to top